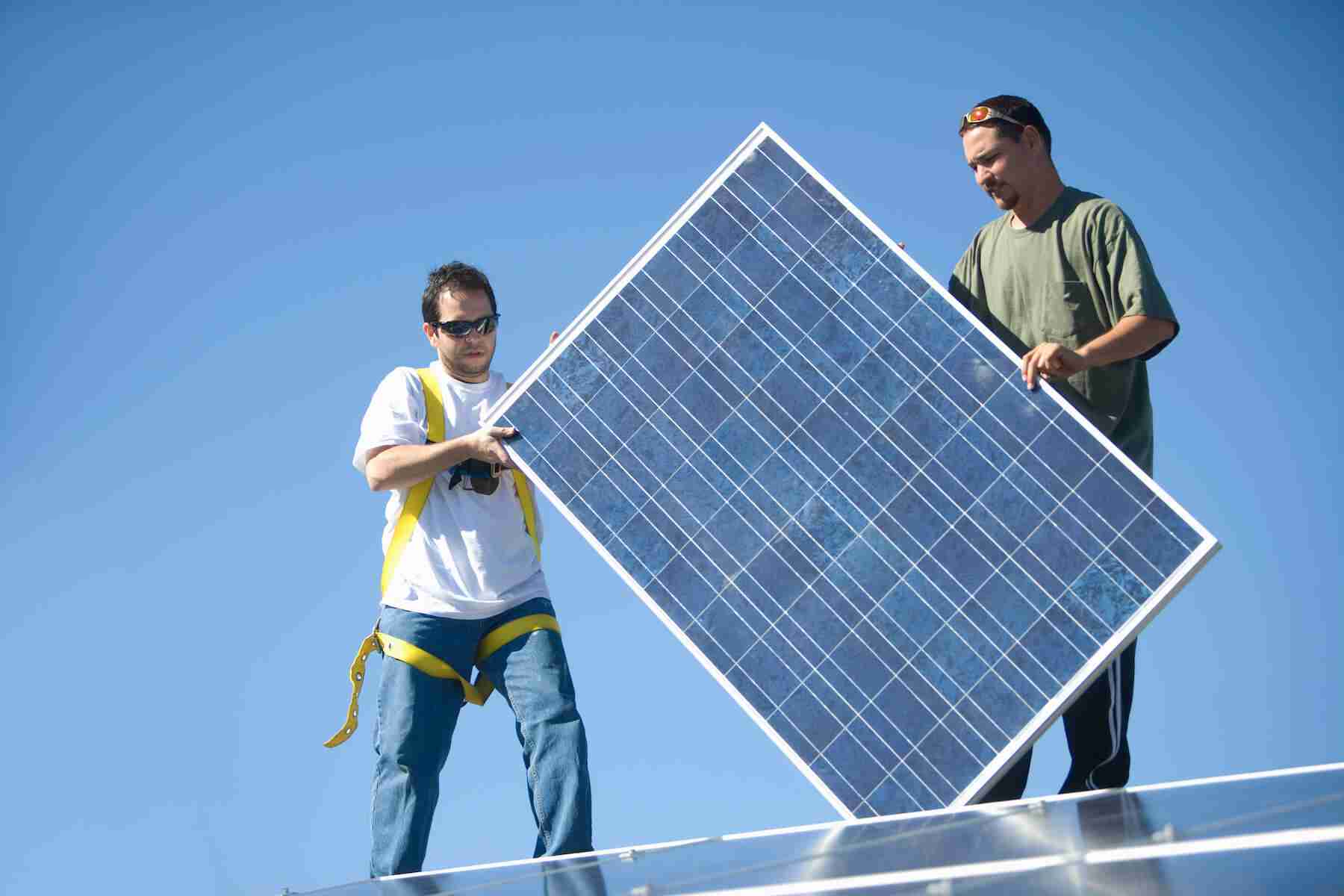 Solar panels, or solar photovoltaic panels, transform sunlight into usable energy by converting the light into an electric field that then flows into a conductive wire.  The conductive wire flows into the inverter which then transforms the electricity to an alternating current which can then be used to power a property. You may remember from physics class that visible sunlight is composed of invisible particles called photons. These have energy but zero rest mass. The photons’ energy is converted into different forms when they collide with other particles, and these forms are determined by what kind of atoms they collide with.

How Do Solar Panels Make Electricity?

A collision generates only heat in the majority of cases. Electricity is produced when atoms become agitated by the photons and split.

It is possible for semiconductors, such as silicon to withstand electrical imbalances because of their remarkable properties. Solar panels, then, will produce electricity as long as photons hit them. Wires are then used to collect and carry the current throughout the system.

Energy Loss in a Solar Cell

In some cases, solar panels appear blue due to the silicon (polycrystalline) used for the panels. This blue color is primarily due to an anti-reflective coating which enhances the solar panels’ absorbing capacity and efficiency.

On the other hand, it has been shown that black solar panels (monocrystalline) have a higher rating in terms of their efficiency, as black surfaces are better at absorbing light. Ultimately, many homeowners choose monocrystalline panels because the black panels match the color of their house or roof better. This is also why some solar panels are blue and some are black.

The Anatomy of a Solar Cell

A solar cell is composed of semiconductor material. Semiconductors conduct electricity better than an insulator but are not as efficient as a material like metal. Typically, solar panels have four distinct layers:

The history of Solar Panels goes back hundreds of years. It took many innovations by many people to arrive at the modern solar panel. The photovoltaic effect, also known as the physics behind solar cells, was discovered by a young French scientist named Edmund Becquerel in 1839 when he was experimenting with a couple of metal electrodes.

Many people don’t realize that Albert Einstein won the Nobel Prize in 1921 for his research dating back to 1900 and technical paper explaining the photoelectric effect. By 1954 Bell Labs had invented a solar cell with 4% efficiency.

How Effective Are Solar Panels?

Today’s solar panel industry consists primarily of 15% to 20% efficient panels and large outliers on either end of the range. Most photovoltaic panels on the market do not have an efficiency above 20%. High-quality solar panels can offer efficiency above 22%, though some are as high as 24%.

How Do Solar Panels Work If There Is No Sun?

The average estimate is that solar panels will produce approximately 10 – 25% of their normal power output when it’s cloudy. In fact, rain can even help improve the efficiency of your solar panels by washing dust and dirt off of the panels. If you live in an area that has a net metering policy, you will also be able to offset grid energy use by contributing excess solar energy back to the grid.

Are There Alternative Solar Technologies to Photovoltaics?

When vetting solar panel installers, it’s important to know all of the different solar technologies that are available today. One of the most common questions asked is if there are alternatives to photovoltaics.

Concentrated solar power systems generate solar power by using mirrors or lenses to concentrate a large area of sunlight onto a receiver.

The sun’s power is used to heat the water in your home using solar water heating systems. Your home can generate warm water from the sun with a solar hot water system. Solar collectors on your roof collect the heat of the sun.

How Does Grid Connection Work With Solar Panels?

In most cases, homeowners who add solar panels to their homes choose to be grid-connected. As a result, the solar panels and the electrical grid can provide energy to the home.

Solar energy is intermittent, starting working after the sun sets and ending when the sun rises again. As a result of this, grid-connected solar homes will use power from the grid to meet their energy needs. It is a seamless process for the homeowner because it happens automatically without them having to do anything.

On the other hand, if solar panels produce more electricity than a grid-connected home can use, the extra electricity will be sent back into the electrical grid. The solar electricity produced will then be used by the residents of the neighborhood. The electricity does not get wasted in this way.

Solving Solar is your Resource for all things Solar

No matter what you need to learn about solar energy, Solving Solar has all the info for you to make informed decisions about your home’s electrical power. Save more money and do your part to protect the environment by switching to solar power today.

If you’re interested in finding out more about how much solar panels can save you, click here to get competing quotes from solar panel installers near you.